ADD/ADHD is being diagnosed much more frequently. Statistics from the Center for Disease Control reports that:

Individuals with ADD/ADHD can exhibit a variety of symptoms and may appear to be impulsive, inattentive, and distracted. However, ADD/ADHD often is found in families.

“A great deal of research has been carried out on the genetic factors that may play a role in attention-deficit hyperactivity disorder (ADHD). Over 1,800 studies have been published on the subject to date. 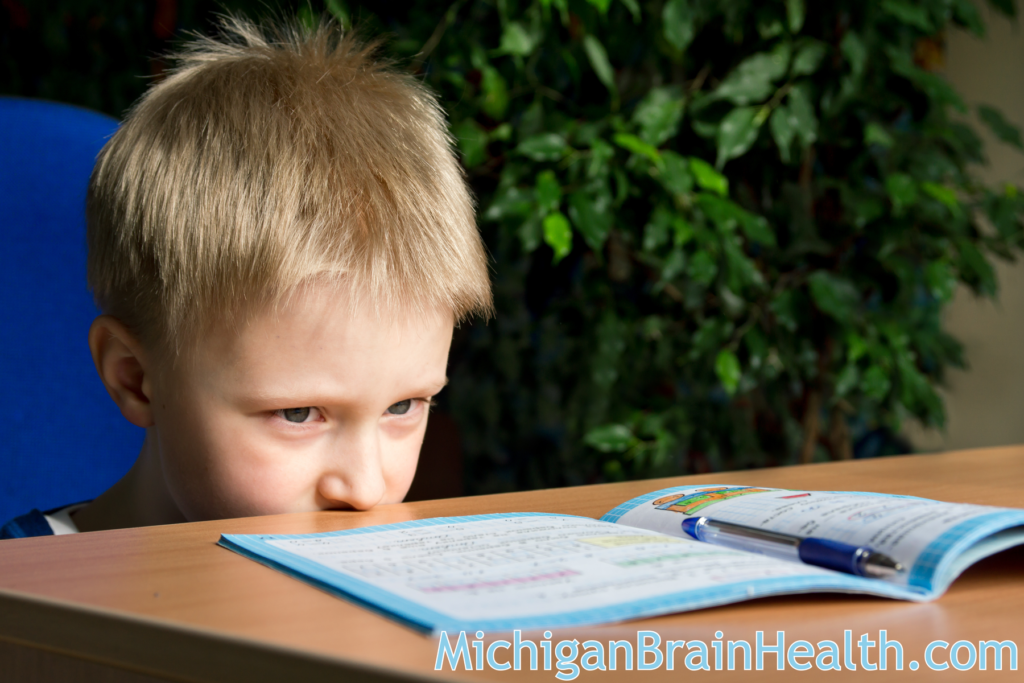 These studies, including family studies as well as those centered on specific genes or genome-wide screening, have produced strong evidence that genes play a role in susceptibility to ADHD. A 2009 review concluded that genetics account for 70 to 80 percent of the risk, with a mean estimate of 76 percent.” [1]

“ADHD is linked to deficits in the functioning of several brain areas, including the prefrontal cortex, the basal ganglia, cerebellum, temporal and parietal cortex. These areas are important in brain activities that may be impaired in ADHD, such as response inhibition, memory, planning, and organization, motivation, processing speed, inattention, and impulsivity.” [2]

Thankfully, there exists a non-drug way to reduce or eliminate the symptoms of ADD/ADHD for both adults and children. Deficits in brain function can be improved using brain-based exercise or stimulation such as Michigan Brain Health’s method of neurofeedback (neurofeedback combined with photic entrainment). In fact, the American Academy of Pediatrics announced in February 2012 that EEG biofeedback (aka neurofeedback) is considered a “Level 1” – “Best Support” intervention for Attention & Hyperactivity Behaviors (ADD and ADHD) for “Evidence-based Child and Adolescent Psycho-social Interventions”. This important announcement recognizes the powerful effects of EEG Biofeedback in providing a non-invasive, non-drug treatment for ADD/ADHD as well as a wide range of other disorders. [3]

THE MAJORITY OF TREATMENT SUGGESTIONS FOR CHILDREN WITH ADHD IN SOUTHEAST, MICHIGAN EMPHASIZE PRESCRIBING MEDICATIONS

There is a large variety of medications used in the treatment of ADHD; here is a partial list:

In my opinion, prescribing medications should only be used when other methods without side effects are utilized, such as neurofeedback, Interactive Metronome, dietary changes, food sensitivity elimination, enhanced parenting and interaction skills (as explained in Chapter 23 (parenting and family strategies) of Dr. Daniel Amen’s newly revised book, “Healing ADD“, as well as exercise.

Medications alone, are not the best alternative to helping with ADHD since, in the long-term,  they do not teach an individual to cope, and they come with accompanying side effects such as sleep difficulties, loss of appetite, personality changes as well as potential cardiac risks.

WHY IS NEUROFEEDBACK EFFECTIVE FOR ADHD?

Unlike the medication used for treating ADHD, neurofeedback helps retrain the brain; leading to significant improvement in ADD/ADHD symptoms.[4] With this brain-based therapy, individuals learn to make long-term improvements in attention and self-control because their brains learn to make healthier brainwave patterns.

ADD and ADHD are brain problems. Neurofeedback enables individuals to work directly on the problem by training the brain to become less impulsive, more focused and calmer, by normalizing the imbalance between slower brainwaves and faster brainwaves that occur in the brain of an individual with ADD/ADHD. It simply helps a person gain control.

At Michigan Brain Health, Dr. Karl R.O.S. Johnson, DC, BCN, and his team are dedicated to helping people from Shelby Township and the surrounding communities in southeast Michigan cope with ADD/ADHD.

If you or your child is facing the challenges and difficulties of ADD or ADHD call my office today to take a step towards owning this disorder by asking for our Free Evaluation (586) 488-4818.

Always remember one of my mantras., “The more you know about how your body works, the better you can take care of yourself.”

For more details about the natural approach I take with my patients, take a look at the book I wrote entitled: Reclaim Your Life; Your Guide To Revealing Your Body’s Life-Changing Secrets For Renewed Health. It is available in my office or at Amazon and many other book outlets. If you found value in this article, please use the social sharing icons at the bottom of this post, and please share with those you know who are still suffering from chronic health challenges, despite receiving medical management. Help me reach more people so they may regain their zest for living! Thank you!