Hyperactivity & Attention Deficit Disorder: Do We Have Options?

ATTENTION-DEFICIT DISORDER AFFECTS A STARTLING 17 MILLION PEOPLE AND SEEMS TO BE GAINING GROUND EVERY YEAR.

As a parent of child suffering with this disorder… what are you to do?? Attention-deficit disorder is the most frequently diagnosed childhood psychiatric condition in America. In the past most medical journals described this disorder as minimal brain damage, hyperactive child syndrome & minimal cerebral dysfunction.

There are three types of ADHD: Inattentive, predominately hyperactivity and combined type. Girls are more prevalent to exhibit the symptom of inattentiveness, whereby boys tend to be more hyperactive. As a child with undiagnosed ADHD becomes a teenager, he/she may become involved in drugs and crime and will commonly drop out of school. In adulthood the predominant features are failure to complete tasks, disorganization, difficulty paying attention and difficulty beginning tasks.

The conventional medical treatment for ADHD is almost always pharmaceutical drugs such as methylphenidate (Ritalin) or or the amphetamine Adderall. A review in the Journal of Clinical Psychiatry notes that two antidepressants — bupropion and venlafaxine — are now being used as an alternative. “Talk therapy” is often recommended in conjunction with prescription medication for ADHD.

The causes of ADHD are many and it would serve your child well for the parents to investigate the possible underlying factors that could very-well be causing the condition.

It is unfortunate that many people who have children suffering with ADHD are not informed of all the options. I must agree that prescription medications such as Ritalin and Adderall can make a significant impact on the symptoms of ADHD. A child who once was inattentive is now focused and doing well in school. Who can ask for anything better?!! But, are you being told everything? What are the long-term health risk for your child?

Studies done on children taking Ritalin using a PET scan revealed that although the children had a reduction in their symptoms the PET scan was highly abnormal.

Most physicians are trained to treat ADHD with amphetamine-like drugs. But nutritionally oriented physicians have known for a long time that food allergy is a primary cause. The first major scientific study to show the link between food allergy and hyperactivity appeared in a 1985 issue of Lancet, a prestigious international medical journal. Dr. J. Egger, head of a pediatric university hospital in Munich, and Dr. J Soothill, London, England, studied the effect of food on 76 hyperactive children. 79% had clear improvement in their mental activity, emotions and behavior and 28 became completely normal. To prove their findings, the researchers reintroduced the allergenic foods to the children and their hyperactive symptoms returned.

THE FOLLOWING HAVE BEEN LINKED TO ADD:

I would have to say that I have not met a parent who did not want the best for their child. The parent who is struggling with what to do to help their child, faces a major dilemma. Should you medicate your child or take the road less traveled and identify the underlying cause of your child’s problem. Realize you have two sides of this sensitive issue. On one hand you have your family physician who insist that pharmaceutical drugs is the only way to go and offers no real alternative. And on the other hand, the volumes of medical research is quite over-whelming in favor of looking for the root cause(s) of your child’s condition.

The article above is compliments of Functional Medicine University.  There are additional brain-based care recommendations that many clinicians around the world use. One very well researched procedure is known as neurofeedback. I have helped many children and adults with ADHD  with a combination approach utilizing functional neurology, functional nutrition and neurofeedback.

In addition to the triggers identified above, brain wave training, also known as EEG biofeedback and neurofeedback have many scientific studies showing this unique form of assistance is helpful for reducing the negative behavioral effects of ADHD. 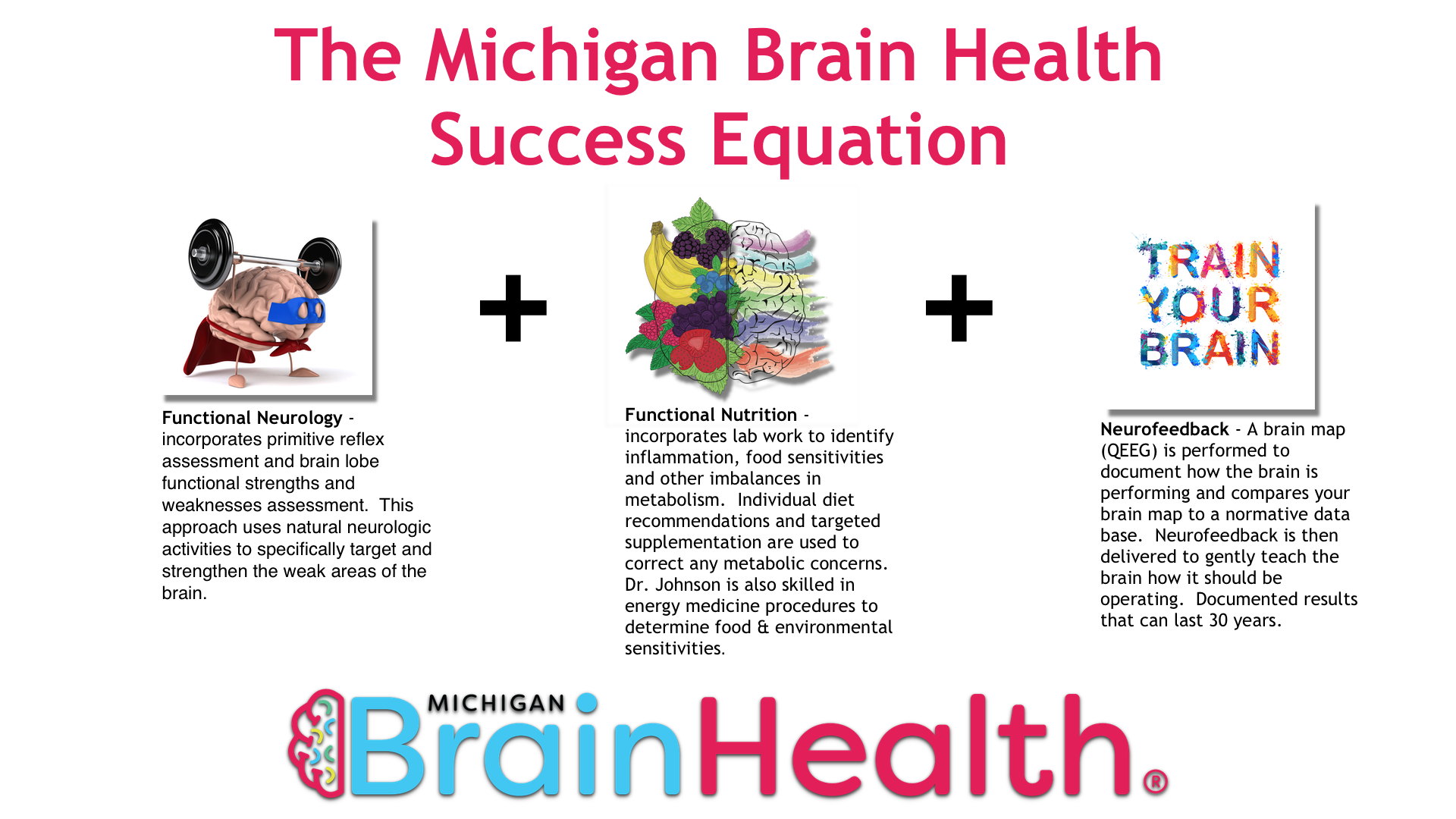 Neurofeedback is a computer-based system that corrects brainwaves safely while you watch a movie or listen to music. Irregular brainwaves are responsible for many neurological conditions such as ADHD, learning issues, anxiety, depression, insomnia, migraines, memory loss, and more.

“EEG Biofeedback is employed to modify the electrical activity of the CNS including: EEG, event related potentials, slow cortical potentials, and other electrical activity either of subcortical or cortical origin. Neurofeedback is a specialized application of biofeedback of brainwave data in an operant conditioning paradigm. The method is used to treat clinical conditions as well as to enhance performance”

Neurofeedback has over 50 years of research and case studies proving its effectiveness. It is used by thousands of health professionals worldwide, including the NFL and the United States Veterans Administration to treat concussions and brain injuries.

SO, IF YOU ARE LOOKING FOR A DRUG-FREE STRATEGY WITH PLENTY OF CLINICAL EFFECTIVENESS, YOU JUST FOUND ONE!

My hope for you is that you or your child can grow, develop and prosper in life. For more details, read my publication, “Successful Solutions for ADHD, Symptoms of ASD, Dyslexia, OCD and other Brain Based Issues in Children and Adults“, by clicking on the link below.

Successful Solutions for ADHD, Symptoms of ASD,
Dyslexia, OCD, and Other Brain Based Issues in Children and Adults

For more details about the natural approach I take with my patients, take a look a the book I wrote entitled: Reclaim Your Life; Your Guide To Revealing Your Body’s Life-Changing Secrets For Renewed Health. It is available in my office or at Amazon and many other book outlets. If you found value in this article, please use the social sharing icons at the top of this post and please share with those you know who are still suffering with neurobehavioral issues or other chronic health challenges, despite receiving medical management. Help me reach more people so they may regain their zest for living! Thank you!

Reduce initial dose of the virus and optimize your immune system

Can We Reduce Exposure to Coronavirus by Changing Breathing Behavior?

Don’t Be a Fitness Flop: How to Meet Your Goals and Stay Motivated